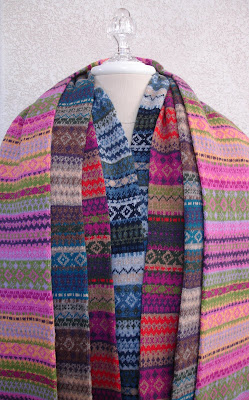 Fair Isle Scarves
I fell for Fair Isle a long time ago. In fact it was back in the 1970's when I was just a teenager. I still even have my vintage Esprit Fair Isle vest to prove it!
I'm still falling for Fair Isle today and love it even more. Now that I'm a knitter, I love the history and the tradition of Fair Isle knitting.
Did you know that it was Edward, The Prince of Wales back in 1921 that made Fair Isle fashionable? He wore a Shetlands hand knit Fair Isle sweater on the links at St. Andrews, Scotland for just one hour and started a fashion revolution.
Thanks to fashion designers like, Ralph Lauren Fair, Isle continues to be a classic.
Knitting designers are keeping the Fair Isle craft alive,too. Just check out the fall Debbie Bliss Magazine to see Fair Isle updated with her Scottish Eccentrics collection. 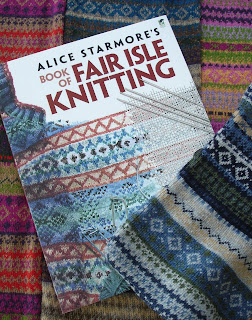 Book of Fair Isle Knitting
by Alice Starmore
I've wanted a Fair Isle scarf for a few years now. Every fall I start shopping online to see if I can find a Fair Isle scarf that is wool and well made. There are a few Scottish fashion houses that have them but I have never really fallen in love with one online yet.
I've even thought about knitting a Fair Isle scarf. This could be quite a task since I'm a newer Fair Isle knitter, an English thrower and knit Fair Isle with only my right hand. I think it would take me a long time to knit a traditional Fair Isle Scarf.
When Alice Starmore's The Book of Fair Isle Knitting was reprinted, I purchased it immediately for the day when I really want to master Fair Isle and maybe attempt that scarf. Serious knitters know, it is the reference book for Fair Isle. 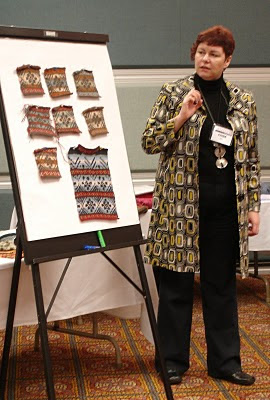 Fiona Ellis Fair Isle Workshop
To help my Fair Isle scarf quest, I not only bought the right books I also started taking classes. Earlier this year, I took a fabulous workshop Experiment With Color & Fair Isle from Designer Fiona Ellis at Stitches West.
After the workshop, I had more confidence and did start dabbling a bit at Fair Isle knitting with my Katie beret. As much as I love Fair Isle though, I often wonder if I have the patience and desire to knit a traditional Fair Isle scarf? 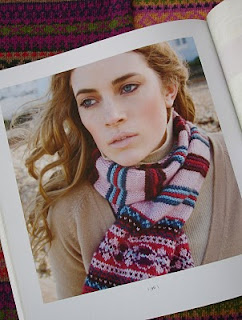 Now Louisa Harding's Jane scarf is a Fair Isle scarf that I do plan on knitting one day. Louisa designed just enough Fair Isle in the border to challenge a knitter like me. I know this is a scarf that I will enjoy knitting because it won't take me forever to knit.
I still do want that classic Fair Isle scarf though. I always thought I'd have to go back to Scotland to get one. Well, that was until yesterday. 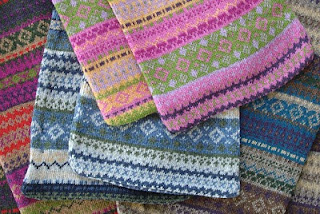 Yesterday I stumbled upon some fantastic Fair Isle scarves at Nordstrom.
For all you knitters, yes, the scarves are machine made, 90% wool and Made in Italy. I think their quality is very good. Good enough for Nordstrom and good enough for me.

So, now I am asking myself when is it okay not to knit? I think in the case of this type of Fair Isle design it is perfectly okay to buy a ready made scarf. So I succumbed yesterday and bought Fair Isle scarves at Nordstrom. Lucky for me, they had just arrived so I had my choice of colors. There are at least seven color choices ranging from classic to fab and bright. 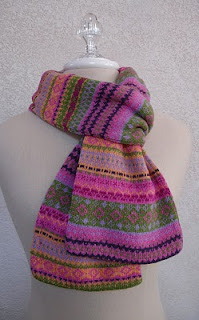 So if you're like me and have fallen for Fair Isle, check out these scarves at Nordstrom.
They are currently only in stores and not online.
Posted by Unknown at 9:27 PM 3 comments: