Cotswold Sheep
(I walked amongst the sheep on a Cotswold foot path!)
It's an American knitters dream "come true"
to spend any time in Great Britain.
I was fortunate to spend 10 days last month travelling through England and Edinburgh, Scotland.  Besides having tea nearly everyday (my other passion) I also filled my time with British wool and shopping.
Many have asked about my trip. I will certainly be writing about my travels and sharing my shopping secrets with you through out the year.
For now, here are a few of my favorite photos...
I call British Wool.


Little Man
Adorable little man in his "little wool suit" spotted at Portobello Road antiques market in London.
Why, oh why, didn't I bring him home?
Wool
Adorable yarn shop Wool in Bath, England.
The gracious owner Laura even told me where to get my hands on
the Premier Issue of Mollie Makes .
Thank you, Laura!
Classic British Wool
Never tire of the British classics....
cardigans and cables were everywhere!
Shetland Wool
Shetland Wool spotted at the hip yarn shop K1 Yarns
in Edinburgh, Scotland.  Loved this shop and will write about it soon.
Fabulous Fair Isle!
There's nothing better than shopping for fabulous Fair Isle
on Edinburgh's Royal Mile.  Yes, I brought home a few scarves!
Yorkshire Wool
Since I have Pontefract, Yorkshire roots,
this local Yorkshire yarn came home with me.
Purchased at Ramshambles "in the Shambles", York, England.
It was so fun to "talk shop" with Katey, the owner.  She had recently been to a trade show in Warwick and was seated next to Debbie Bliss at dinner!  Talk about true-bliss!


Lambs-Wool
And lastly, there were even adorable lamb mugs spotted at the
Emma Bridgewater factory in Stoke-on-Trent, England.
I had the most delightful day at the Emma Bridgewater factory.  I even met Matthew Rice (owner, designer, author, artist and husband of Emma Bridgewater).
Matthew was so kind to take time to chat with me.  I seized the opportunity and told Matthew to please put in a word with Emma about "knitting theme" mugs.  I know there is a Campaign for British Wool and I think it would be fabulous to see some Emma Bridgewater mug designs promoting British Wool and knitting.
And here's the best part....I asked Matthew if Emma knits.  Matthew told me that Emma was in the knitting industry years ago and worked for the company that did Lady Diana Spencer's famous jumper (sweater) during her engagement to Prince Charles.  Oh my gosh...love this story!
So, maybe there's a chance that Emma will design a mug for us knitters someday!
Posted by Unknown at 10:31 PM 1 comment:

le magazine
(the magazine)
I brought home from Paris,
the Mai-Juin (May-June) issue of Marie Claire Idees.
I found out on my trip to Paris last month
that the French are very crafty!
Oui, I do have a French name but je ne parle pas francais
(I don't speak French)  let alone read it.  When it comes to this beautiful magazine though, you don't have to be able to read French to enjoy it.
Just like everything in Paris, this magazine is filled with beautiful images and inspiration.
Here's a look inside...
and please pardon my French!
Effet couture
Creation pour une table gourmande!

Throughout le magazine the photo stylists have used patisseries
and macaroons from Laduree.  Love that!
les macaroons
Idee Broderie = Idea Embroidery
I discovered while shopping at the Paris department stores that the French love needlework.  Along side the yarn departments were always embroidery and needlepoint departments.

You can purchase this as an apron kit at Maire Claire Idees online.
Terrain de jeux
Idee Tricot = Idea Knitting
Since I'm a knitter...I adore this bebe (baby) blanket!

I love how it's edged with de bias (bias trim).

The pattern is in the magazine and its supplies are available at
La Droguerie.  I loved this store and will tell you more about it soon.

I can tell you that French crafters love
de bias Liberty (Liberty bias trim)
and I stocked up for some French inspired projects
that I saw at La Droguerie!

Le magazine also has recipes, beauty tips and more.
Everything a "wanna-be French girl" could want!

Oui, the pattern by la designer Anne-Claire Petit is in the magazine.  I would love to whip one up....
guess I better sign up for French lessons after all!

Ooh, I Could Do That! 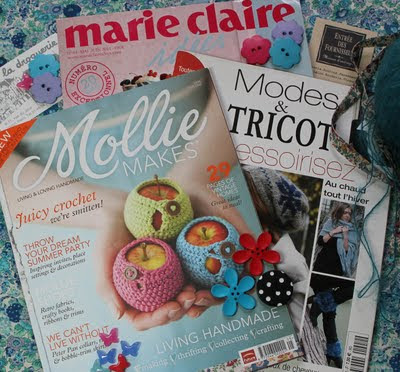 Idees
(Ideas)
I am so inspired!
I just returned home from the most wonderful holiday (vacation) in
England, Edinburgh, Scotland and Paris, France.
Let me tell you...I saw so many cute shops and came home with so many crafty ideas!
I took lots of notes and photographs that I will be able to share with you.
For now, I must tell you about the most adorable new craft magazine in the UK...
Mollie Makes! 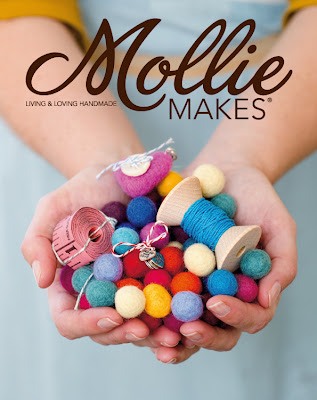 Feeling Crafty
Mollie Makes premiered in the U.K. on May 12th and is flying off the shelves.  I know why.
This magazine has a modern "fresh-look" and "vintage-charm" to appeal to "hip" crafters all over the world.
Mollie's motto...
Living & Loving Handmade.
Mollie Makes is all about:  making, thrifting, collecting and crafting.  Right up my alley!
Here is a peak inside the magazine: 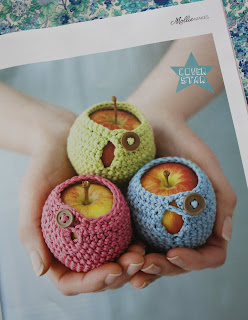 Apple Jackets
How d'you like them apples?
Aren't these crochet apple jackets adorable?  I love their sweet vintage colors.  They are crocheted in Cotton DK yarn.


Mollie says " this is a very simple pattern using the most basic of crochet stitches".
Being more of a knitter, I think even I could crochet these.  How about you? 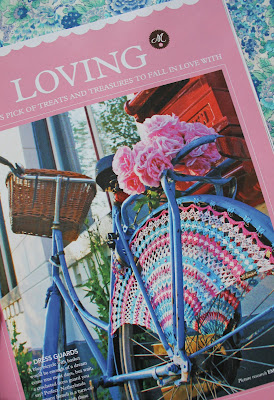 Dress Guard
I love to wear skirts
so how cute it this dress guard for riding your bike in your favorite summer skirt!
This is actually a crochet product featured in the magazine
by a Netherlands company, Simeli.
There is no country in the world which pays so much attention to dress guards as the Netherlands does.

I would love to see this trend take off in America...
I think my knitting friend Sheila could start it
since she rides her bike everywhere! 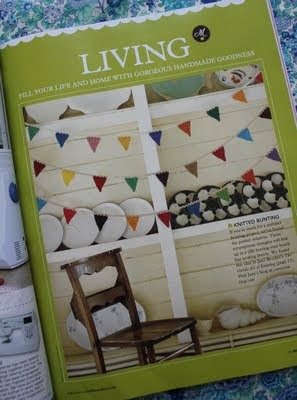 Knitted Bunting
I spotted buntings (banners) all over England.
With the Royal Wedding still a buzz, there were Union Jack buntings everywhere.  I almost bought one until I read the label and saw that is was outsourced and made in China.
I would rather have a hand-made bunting...hey, there are plenty on Etsy.  Or better yet, I can knit one like this adorable knitted bunting idea from Jane Brocket's new book The Gentle Art of Knitting.
Mollie Makes is set to arrive in the US on June 9th in limited supply.  The first two issues appear to be sold out since new subscriptions begin now with Issue 3.  I think I better go sign up for a subscription.
Thank you, Laura!
I must say "thank you" to Laura the owner of the adorable yarn shop Wool in Bath, England.
Thanks to Laura, I discovered Mollie Makes with a copy she had in her shop.
I went to the local book store in Bath and it was already sold out.  I went back to Wool and Laura referred me to another adorable shop in Bath, The Makery which had a few copies left.
I wish I could have stayed longer in Bath, England...
both shops were delightful.
Posted by Unknown at 8:05 AM 5 comments: