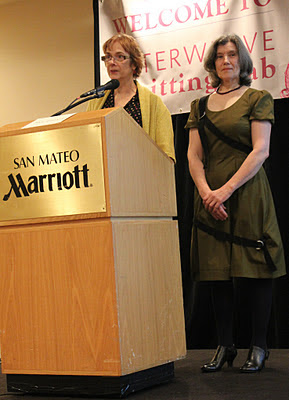 Welcome Alice Starmore
Alice Starmore
certainly needs no introduction.
She is a legend in the knitting world.
I feel so fortunate to have attended
Alice Starmore's talk
"My Colorful Life"
at
Interweave's Knitting Lab.
Alice captivated myself
and the capacity-filled ballroom of knitters
for over 2 hours
with her delightful Scottish accent,
humor and wonderful stories
about growing up
on the Isle of Lewis, Scotland. 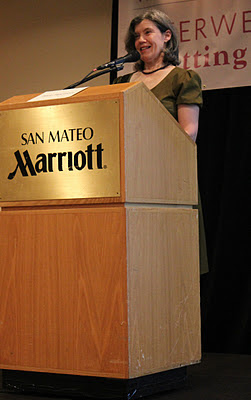 My Colorful Life
"Color, texture and pattern
these are the elements I always work with."
Whether she's designing knitwear, artwork, tapestry, photography or environmental education
Alice always works those three elements.
And so began Alice's speech and slide show presentation
My Colorful Life.
Alice grew up on the Isle of Lewis, Scotland where she says,
"The coastline is pounded by the ocean."
According to Alice,
where she comes from and its physical landscape,
shaped her.
She lovingly called the Isle
"A place that fires the imagination."
Here's how growing up on the Isle of Lewis
its landscape and colors
shaped her as a designer and artist.
Growing Up on the Isle
Alice grew up in a traditional Lewis fishing family.
You could sense her "Scottish pride" the way
she spoke lovingly about her family
and life on the Isle of Lewis.
She told us,
"My Grandfather was a fisherman in the era
of wooden ships and iron men."
She learned how to knit as a little girl from her aunties.
Her aunties taught her to knit
Gansies (fishermen sweaters).
Alice said , "I was fascinated with Gansies."
Her father was also a fisherman
who eventually came to shore
(as they say on the Isle)
and became an engineer for Harris Tweed.
Her father's career at Harris Tweed
had an enormous influence on her.
As a child she loved the going to the plant with her father
to see the dye vats and bolts of Scottish tweed.
There was a lot of fabric at home, too.
Alice's mother was a skilled dressmaker, originally from
Glasgow, Scotland.
She continued dressmaking after marrying.
Alice fondly remembers rushing home from school
just to see what new bolts of cloth had arrived.
It was her mother who taught Alice Fair Isle knitting.
Alice's mother had learned Fair Isle knitting
as a young nurse in Glasgow from her best friend from Shetland.
Alice obviously took a liking to stranded color work.
In her teens,  Alice told us she loved fashion magazines
and sewed all her own dresses for the
Friday night Disco dances.
And how about this...
Alice said she "Always loved knitting."
She called herself "A bit of a secret knitter" as a young girl,
because it wasn't thought of as cool.
Hearing her story,
it was easy to see,
that Alice was destined to be a designer. 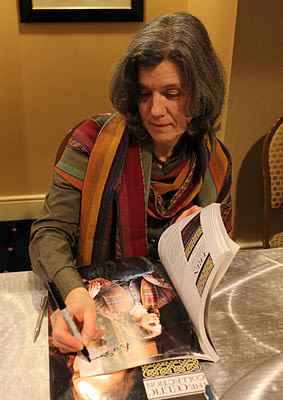 Signing My Books
Alice also talked about her knitting books
and their inspiration.

.In 1992 she wrote her  Fishermen's Sweaters book
with traditional Guernseys patterns.
She wanted to "carry on those wonderful garments"
that her aunties taught her.
Her book The Celtic Collection was influenced
by her Celtic past.
She grew up speaking both Gaelic and English.
She began the design process for this book
with Celtic doodles.
Alice told us she doodles all the time.
As for her patterns,
she hand draws all of her designs
so they have swing and movement.
The Celtic Collection has been her most popular book
and has never been out-of-print.
It's now in its 14th printing.
(My copy is now signed by her.)
As for Alice's beloved book, Tudor Roses.
The number one question she is always asked,
"Will it ever be reprinted?"
Alice's response in her fabulous Scottish accent...
"You never know!"
Her Colorful Life
"My soul is where the moorland is".
~ Alice Starmore
As a child, Alice grew up playing on the moors
during the summer months.
The moors had a profound effect
in her design work and love for color.
Alice says "Color is everywhere."
"Forget the color wheel and look at nature around you."
Today, Alice Starmore is so much more than just a
legendary knitter famous for color and pattern.
She is also a respected artist,
author, textile designer, photographer,
environmental educator and conservationist.
Alice said she was privileged that the
"fireside craft of knitting"
brought her to America back in 1985.
For the next 15 years she came to America every year.
This was her first time back in over a decade.
All I could think
during her entire talk,
was how privileged we were at Knitting Lab
and that Interweave brought her all the way back to America
so we could all learn about Alice's...
Colorful Life!
Posted by Unknown at 12:00 AM 2 comments: 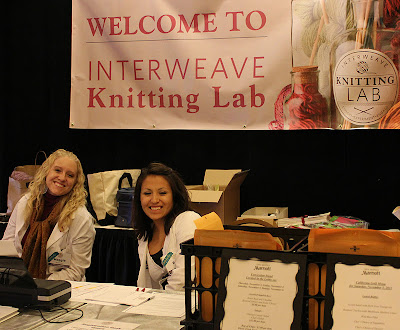 Welcome to the Knitting Lab
Hats off to Interweave
for their first annual Interweave Knitting Lab,
November 3-6, 2011.
I was thrilled to head back to my old college stomping grounds
in San Mateo, California on Saturday for their
special events with Alice Starmore.
The Knitting Lab event appeared to me to be a huge success.
Everyone on the Interweave team wore lab coats and were professional, friendly and helpful.
I met Beth, Interweave Sr. Marketing Manager and she told me that they wanted the Knitting Lab
to be "the magazine coming alive".
She summed it up best when she said
"the Knitting Lab is an educational conference with a marketplace".
I chatted with a few fellow knitters and they all raved about the classes and instructors.
Here is a recap of my day at Knitting Lab... 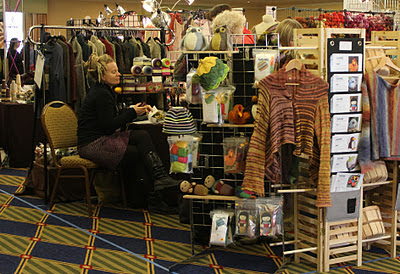 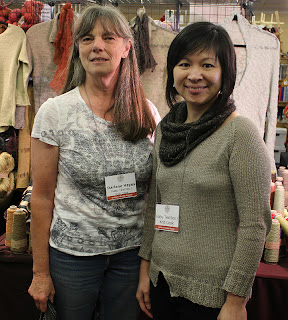 The Habu Ladies
I saw some familiar faces at the Market,
like the lovely Habu ladies. 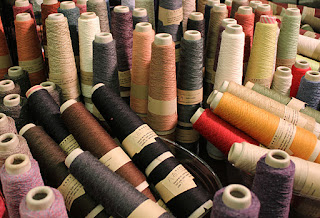 Yummy Yarns
Yes, there were yummy yarns
at the Knitter's Market! 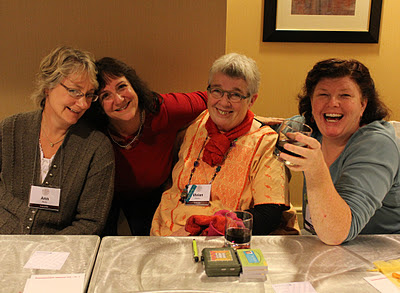 Designing Women
(Left to right: Ann Budd, Joan McGowan-Michael, Vivian Hoxbro & Annie Modesitt)
Of course, the best part of the Knitting Lab were all
the Designing Women!
Each day along with classes,
there were book signings with
favorite knitting authors and designers. 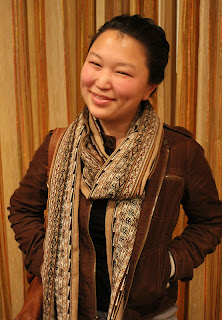 Eunny Jang
I also ran into Interweave Knits magazine Editor,
Knitwear Designer, Author and TV knitting celebrity...
Eunny Jang.
Eunny was so cute and nice.
I couldn't wait to tell her how much I enjoy  Knitting Daily
every Tuesday morning at my house. 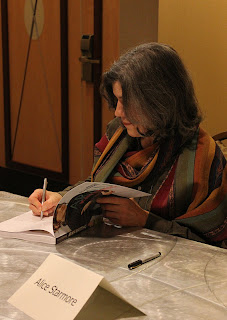 Alice Starmore
Naturally, I've saved the best for last...
the legendary Alice Starmore was at Knitting Lab
as a keynote speaker for "My Colorful Life"
as well as a book signing.
I was a bit curious how Interweave managed to get Alice Starmore to come out for Knitting Lab.
While chatting with  Karin Strom, Editorial Director,
I found out that Alice is long time friends
with Interweave founder, Linda Ligon.
Last night when Karen Strom introduced Alice for her talk,
she told us that it took Alice 27 hours to travel from her home
on the Isle of Lewis, Scotland to San Francisco, California.
Alice said it had been 13 years since she has visited the
United States.
How grateful we knitters are that she made the extremely long journey.
At the book signing earlier in the afternoon,
I asked Alice what else she will be doing on her visit
to Northern California.
She told me that she loves the Pacific Coast and Pacific Ocean
and is looking forward to spending time north of San Francisco
at the coast again.
It was a once-in-a-lifetime opportunity to meet Alice Starmore
and another knitting dream come true for me.
Stay tuned for my upcoming post on meeting
this legendary knitter.
Posted by Unknown at 4:17 PM 1 comment: