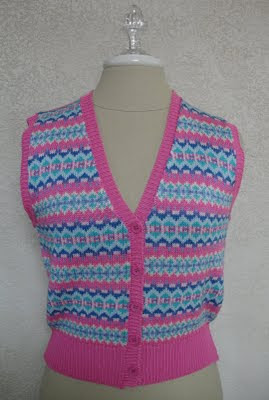 Esprit Fair Isle Vest
Ta-da...here it is my vintage 1980's Esprit Fair Isle vest!
My vest is still in practically new condition today. I think I only wore it a few times back in my college days. I must have really loved it since I saved it and packed it safely with my special scarves. Who knew I was a Fair Isle fan back then and didn't even know it!

I am definitely a Fair Isle Fan today. I am getting ready to embark on my first Fair Isle projects out of the latest Rowan Magazine # 46. I am nervous to knit Fair Isle, since I am a tight knitter and knit English throw style. I will be knitting my Fair Isle in the one-hand method.

If you have the new Fall/Winter 2009 Debbie Bliss Knitting Magazine there is a great article and step by step instructions for both one-hand and two-hand methods for Fair Isle knitting. The article called Fall for Fair Isle says "this colorwork technique is not difficult to master, requiring the use of only two hues in each row. After just a little practice, you'll be enchanted with the exquisite results." Sounds encouraging to me!

Do you remember the Esprit label back in the 1970's and 80's? At my recent knitting guild's retreat in South Lake Tahoe, I brought up Fair Isle and my Esprit vest. My knitting friend Beth and I reminisced about how much fun it was back in the day shopping at the Esprit outlet in San Francisco. You could always count on a long line to get in the Esprit outlet. Those were the days!

And, just so you know, the moths can't get to my Fair Isle vest...it is 100% acrylic. I still love it though and hope to knit a classic British wool Fair Isle vest someday! For now, I will keep to my small Fair Isle projects though...my mitts and a beret. Of course, I will let you know how I fair! 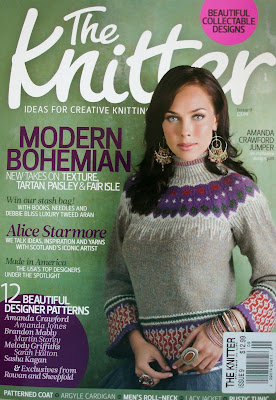 Have you snagged Issue 9 of The Knitter yet? I lucked out and found a copy a couple weeks ago. I am a big fan of The Knitter for it's classic British style.

I must say that Issue 9 of The Knitter shakes things up a bit with a more modern Bohemian theme. Since I was raised as a San Francisco Bay Area girl...I have a bit of a BoHo side, too. I found this issue to be fun, colorful and filled with modern takes on Tartan, Paisley and Fair Isle classics.

Enough said...let me give you a look inside: 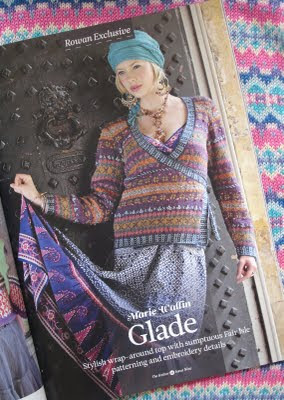 Glade by Marie Wallin
Glade by Marie Wallin is a Rowan exclusive for this issue and will not appear in any Rowan publications. This colorful Fair Isle wrap with it's embroidery details is probably my favorite pattern in the issue. The wrap was inspired by North European folk art and knit in Rowan's Felted Tweed.
Hmm...I am about ready to tackle my first Fair Isle projects, Janice Anderson's mitts and beret in Rowan's Felted Tweed from Rowan Magazine # 46. We shall see how I do with my Fair Isle knitting. Would I ever be up for tackling the Glade Fair Isle wrap? I do hope so!
I adore Fair Isle. I have photographed this issue of The Knitter on my colorful vintage 1980's Esprit Fair Isle vest (100% acrylic/machine knit). It's funny that I never really saved much from the wardrobe of my youth except this Fair Isle vest and a few other hand knit things. I guess that says there was always a love for knits in me...even during my 30 year knitting hiatus! 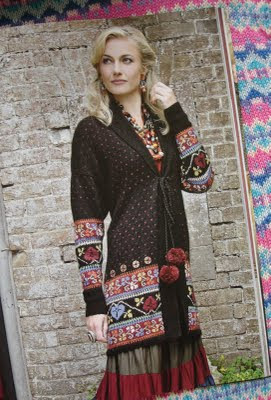 Another beauty in this issue is the Carinthia Coat by Sasha Kagan. I recently discovered fashion designer Sasha Kagan when I lucked out and found a 1985 copy of The Sasha Kagan Sweater Book (her first book) filled with her fantastic Fair Isle designs!

Sasha's Carinthia Coat takes it's influence from different folk designs from around the world. The pattern can be knit with the black background as shown or with an alternative cream background. It is knit in UK Alpaca yarn and is knit in both Fair Isle and Intarsia techniques. I think it is stunning! 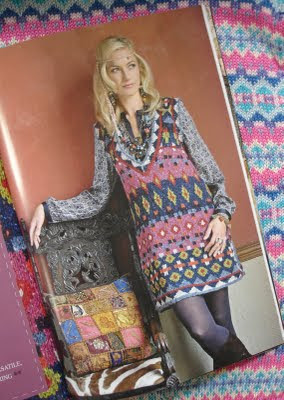 The Romany Tunic by Brandon Mably says "hippie chick" to me! It is knit in Debbie Bliss Luxury Tweed with it's colorwork achieved in the Fair Isle technique. This folk design tunic can be worn many different ways. How would you wear it?

Besides 12 collectable patterns the magazine has an interview with Alice Starmore, one of hand knittings most iconic designers. A few years back I found a vintage copy of Alice Starmore's Fair Isle Knititng and sold it on Ebay. It fetched a pretty penny but I later regretted selling it once I discovered who Alice Starmore is. Lucky for me, that book is now in reprint and I've ordered a copy.

The Knitter Magazine has proven to be very popular with it's US audience. Issues are often difficult to find. If you have missed out on an issue, you can always give shopping on Ebay or Ravelry a try.

For now, I am anxiously awaiting the next issue of The Knitter Issue 10 which is filled with British Classics and British Wool...my kind of knitting! After all...part of my English ancestry were wool merchants in wool towns in Yorkshire and Norfolk England.