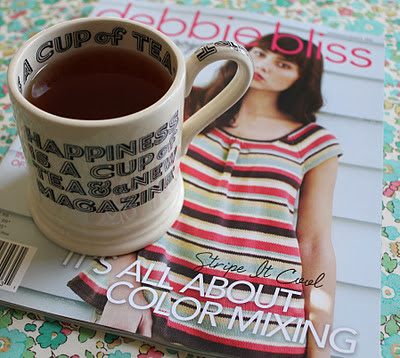 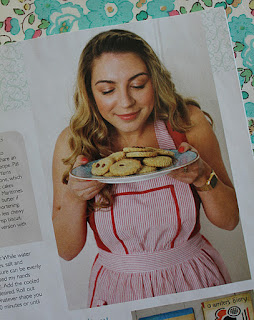 Nell's Oat Cakes
One of my favorite features of Debbie's magazine
is called
The Blissful Life.
I always dash there to see what recipe
Debbie's daughter, Nell will have for us.
This issue she features a recipe for Canadian Oat Cakes
inspired by her and her "mum's" trip to Canada last year.

I'm thinking those biscuits
would be perfect with a cup of tea! 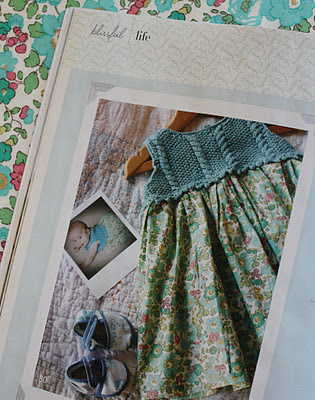 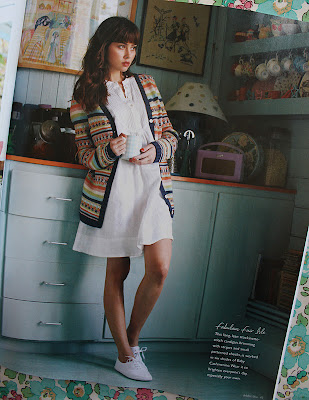 Fair Isle Cardigan
In her Editor's Letter,
Debbie tells us
"I love the seaside
so I didn't need much of an excuse
to introduce features with a nautical theme in this issue."
You can see her love for the seaside with her patterns in the sections named
Simply Stripes and Kids Ahoy.
I like her Fair Isle Cardigan (above)  featured in Simply Stripes.
I think it has a bit of a "retro"
or "Cath Kidston look"
and is worked in six shades of Baby Cashmerino.
I also adore the cute seaside cottage
and all the vintage props they used for the photo shoot! 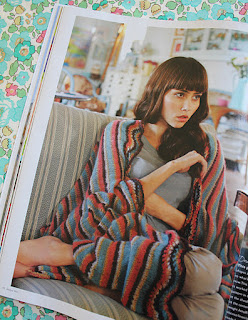 Chevron Stole
Who wouldn't want to snuggle up at the beach in this?
I have to say,
this Chevron Stole and its color combination
reminds me a bit of
Missoni's
collaboration with Target last year.
It's knit in a combination of Debbie's Bella and Angel yarns
which is a much nicer yarn range
than the Missoni for Target,
acrylic items. 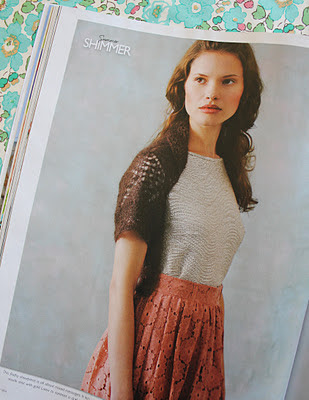 Lace Shrug
This lacy shrug is probably my favorite pattern in the magazine.
It's knit in Debbie's new Party Angel yarn
that has a gold or silver lurex thread combined with the mohair.
It's knit in one piece and without any seams.
Love that! 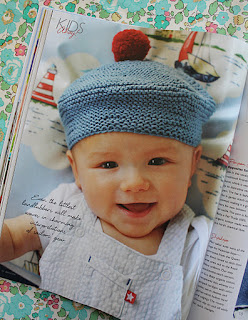 Oh, Baby!
There are a few new additions in this issue.
In Nell's Diary,
Nell writes about her and her mum's experiences on their trip
to Canada last year.
There is also a new column called Focus on Fiber by
industry expert, David Watt.
And of course,
it wouldn't be Debbie Bliss
unless there were some adorable baby designs like the
little beret above!
It's another great issue
and it really does get you in the mood
for spring and summer knitting!
Posted by Unknown at 7:26 PM 3 comments: 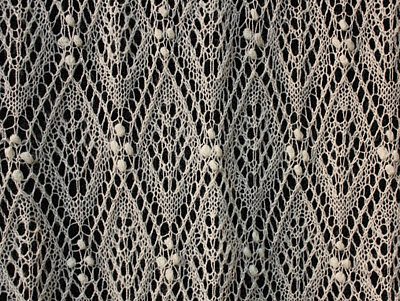 Estonian Lace
Knitting historian and designer, Nancy Bush
wrote the book Knitted Lace of Estonia
and
there's just a few weeks left to see her personal collection of
Estonian lace
at
Lacis Museum of Lace and Textiles
in Berkeley, CA.
I had the pleasure of seeing the exhibit recently and
even lucked out with a personal tour
by Lacis owner, Jules Kliot.
Here are a few photographs to give you a feel of the exhibit.
Please note,
my photographs do not do the lace work justice.
The lace work details are incredible to see up close and in-person.
I highly recommend visiting the exhibit before it ends! 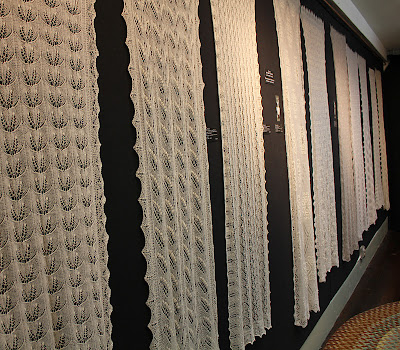 The Shawl Wall
The lace shawls are so beautiful to see in person.
Many of the shawls are from Haapsalu,
a small seaside town in western Estonia.
The work on the Haapsalu lace shawls seemed flawless
and almost appeared to be machine made...
even though I know they are not. 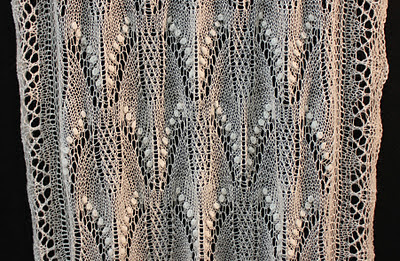 Haapsalu Shawl
This was one of my favorite lace shawls.
Haapsalu Lace Shawl
Pasqueflower Pattern 4
It's a traditional rectangular wool shawl with a sewn on edge,
20" x 62".
Maker unknown. 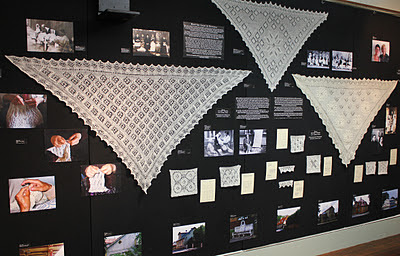 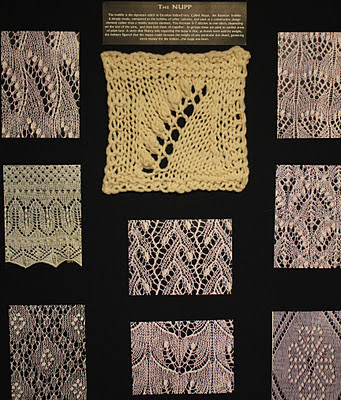 The Nupp
The nupp is a common motif in Haapsalu lace.
According to Nancy Bush,
the nupp is a stylized bobble of sorts.
It is used for adding texture and creating figures in openwork.
Jules told me on my tour,
that he had Nancy knit the large sample above of "the nupp"
so everyone could easily see it and it's details. 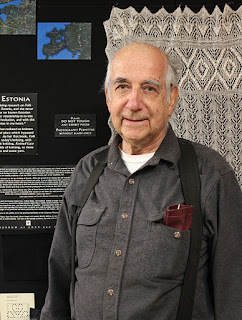 Lacis Owner,
Jules Kliot
For a knitter, like me,
the Estonian Lace exhibit is quite inspiring.
I know someday now,
I will knit an Estonian lace pattern
or take a class from Nancy Bush.
Thank you to Jules Kliot of Lacis Museum
and
Nancy Bush for this incredible exhibit
and the opportunity
to see such beautiful Estonian lace work in person. 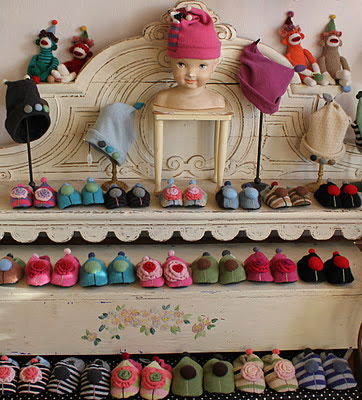 Hats off to Designer,
Yaeko Yamashita
and her delightful shop,
Laku. 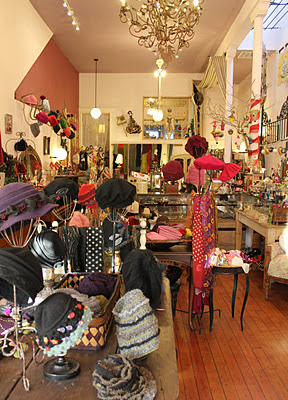 I had the pleasure of visiting Laku
last Christmas Eve when I was in San Francisco.

The moment I walked in,
I knew I was in a magical place!

Laku is a whimsical boutique
where every nook and cranny is filled
with one delight after another!
Besides their magnificent hand-made hats, gloves, scarves, slippers and brooches,
they carry a wonderful array of vintage jewelry
and antique buttons.

I could have spent hours there,
meandering around...
just like a kid in a candy store! 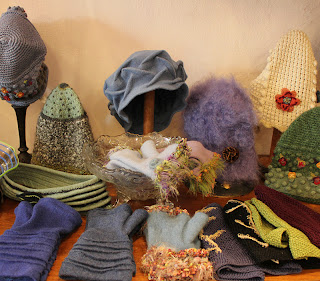 I grew up in the end of the era when wearing hats and gloves
to the city were a must.

I think it's high time we bring back that tradition and
Laku's luxurious cashmere gloves could do just that.
They are scrumptious and the reason I sought out the
Laku boutique.

A year or so ago, while shopping with my knitting friend Daniella in the California wine country we stumbled upon the prettiest hand-made cashmere gloves.  Daniella purchased a pair for her daughter, and the nice clerk told us that they were hand-made by a designer in San Francisco. 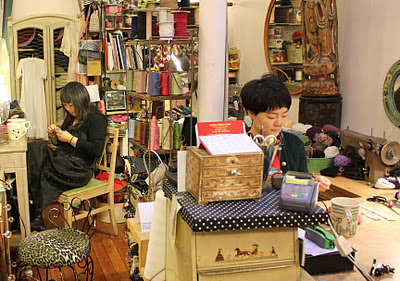 
So, I did a bit of research and found the designer,
Yaeko Yamashita
and her lovely store, Laku.

I'm so glad I found Laku and can't wait to go back.

If you're visiting the city,
this is the place to treat yourself to a pair of gloves,
a hat, a brooch or
a delightful hand-made gift
for a friend or loved one. 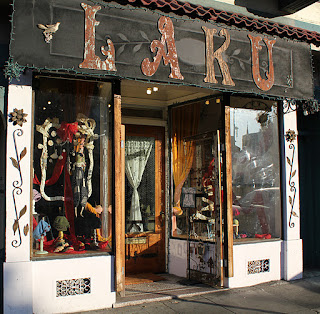 Laku is located  in San Francisco's Mission District
and I highly recommend stopping at nearby Tartine
for lunch or a sweet treat!
Posted by Unknown at 8:26 PM No comments: 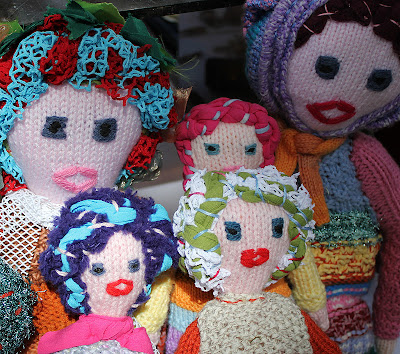 Bonne Annee!
(That's Happy New Year in French!)
I snapped this happy photograph at a Paris Flea Market last year.
The French yarn dolls just made me smile!
Knitting and yarn fill my life with such creativity and joy!
As I reflect on the past year,
I am grateful for all the friendships I have made all over the world
thanks to yarn and knitting.
Posted by Unknown at 3:15 PM 1 comment: