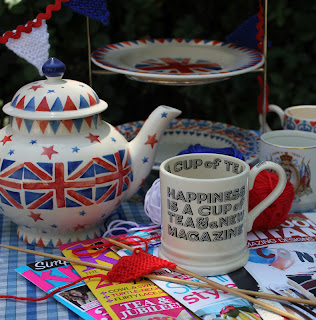 The May issues of the British knitting magazines
have finally landed in the States.
I've been watching for them since I knew they would be filled with Jubilee goodies
and sure enough they are! 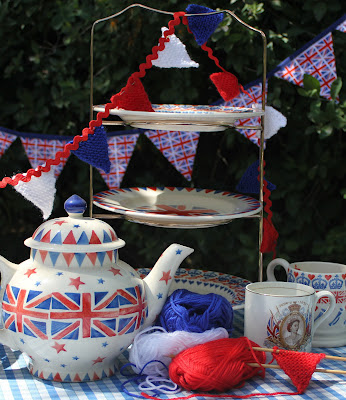 I was so inspired by the magazines
that I'm now (last minute) knitting a mini-bunting
to adorn my Diamond Jubilee tea party table.
I hated to miss out on all the Jubilee knitting
so this little project is one I can tackle
as my hand and fingers continue to heal.

I'm knitting my bunting with a Jubilee Celebration Yarn kit
that came as a "free gift" with the  Let's Knit magazine, issue 54.
There are patriotic projects for the yarn in the magazine but after seeing the adorable
mini-buntings by Nicole at Nicole and the bee,
I opted to use my yarn kit for a mini-bunting like hers.
You can find the pattern on Ravelry called Knitted Bunting
and modify it to a mini size, like Nicole did.

I also love Jane Brocket's knit Bunting
and borrowed her style idea
by putting my knit bunts on red rick-rack
for a vintage1950's look.
Quite fitting I think, since after all,
Queen Elizabeth was crowned Queen in 1952
and had her Coronation in 1953. 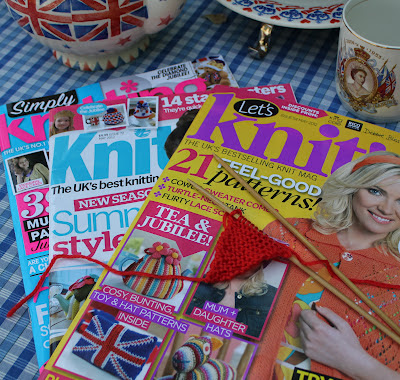 And all the magazines came with free gifts.
I love that about British magazines! 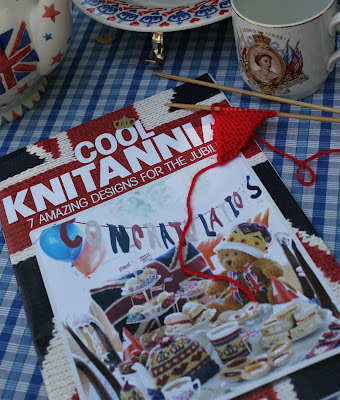 The Simply Knitting magazine came with a free pattern book called
"Cool Knitannia".
I can't wait to knit that adorable tea cosy on its cover
with crowns and hearts
to use with my Emma Bridgewater pottery.

Gotta run for now though...
I'm off to knit more bunts.

(In the photos:  Emma Bridgewater Pottery and Betty and Barclay Union Jack Bunting.)
Posted by Unknown at 10:54 PM 6 comments: 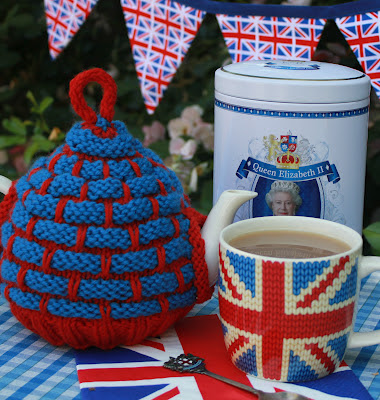 You don't have to be a Brit
to be excited about the
Queen's Diamond Jubilee!
I'm quite excited and plan on celebrating
with tea parties and luncheons
all Jubilee Weekend long!

I had planned on knitting Debbie Bliss' Union Jack flag
and her retro Tea Cozy  for my Jubilee tea parties.
Unfortunately due to my ganglion cysts and hand surgery, my knitting projects of the last six months have been put on hold.

In the meantime,
since I'm not knitting much,
I have enjoyed seeing the Diamond Jubilee
patterns that have debuted in the past few months.
I thought I would share a few of my favorites.
Here they are: 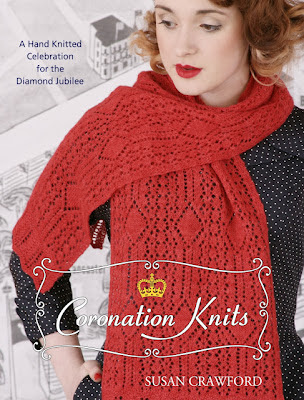 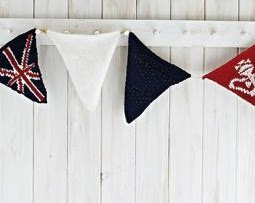 No Jubilee celebration is complete unless you have bunting!
I love this Jubilee Bunting pattern
by Gemma Atkinson
for Rowan.
And, it's a free pattern! 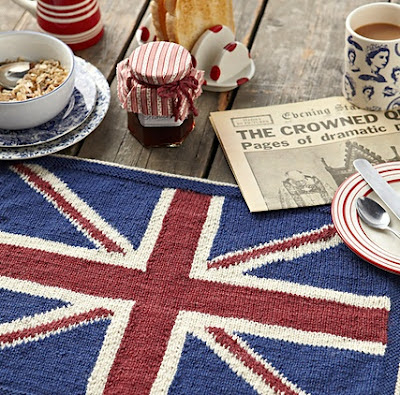 Naturally, the British knitting magazines have special
Jubilee projects in them.
I love this Jubilee Placemat
from the UK's The Knitter, Issue 45.

I love the placemat's photo styling, too.
I would love to sit down at that table for an English breakfast! 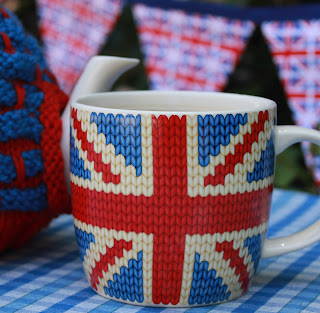 And, in case you're wondering about my adorable
"Knittania" Union Jack tea mug...
my Ravely pen pal Jo sent it to me
all the way from England
to "cheer me up" after hand surgery.

If you love knitting and Britain like me,
you can find the Knitannia tea mugs by Mason Cash
at Lakeland.

(In the photos:  Brick Stitch Tea Cozy hand-knit by me and Union Jack bunting by Betty and Barclay.
Posted by Unknown at 10:37 PM No comments:

Out on the Town! 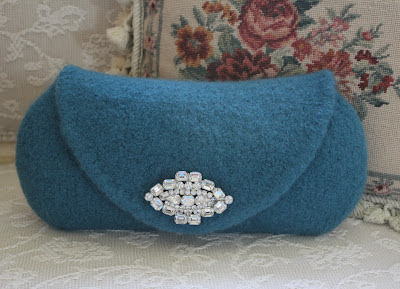 I'm ready for a night "out on the town"!

I've been easing my way back into knitting with felting projects.
For some reason,
I think that knitting with two strands of yarn on bigger needles is easier on my fingers and hand as I recover from hand surgery.

It's been challenging knitting since I still have swelling and numbness (on my long finger)
even now 8 weeks post surgery.
Physical therapy is helping and selecting fun "felted" projects seems to inspire me
to pick up the needles every few days.

I decided that my felted tea party hat needed a matching purse
so this week I knit and felted a darling clutch purse called
Vintage Clutch.

The pattern is very easy to knit and a well written pattern.
My version is knit in Cascade 220, color 9419/Vermeer Blue.
The purse takes less than two skeins and is knit with the yarn doubled.  It's finished size is 6" x 12".

Here are a few before and after photos of my purse. 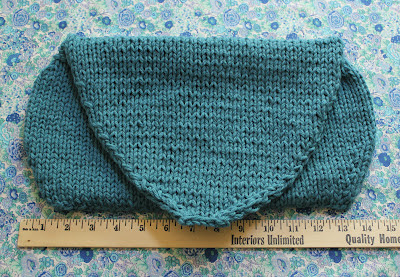 Here's how the purse looks pre-felting. 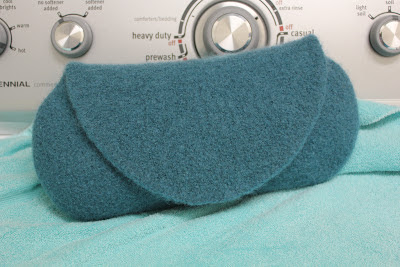 Here's how the purse looks after a few cycles in the washing machine with hot water,
a little soap and a little magic! 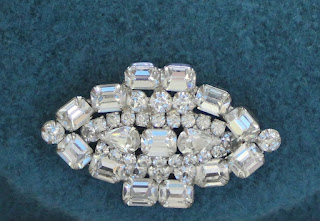 The most fun part of this project is the finishing work
and determining what brooch or pin
you will embellish your handbag with.
Since the designer named it Vintage Clutch...
I think it's perfect to use a vintage pin on it.

G.G.'s brooch is a vintage Weiss rhinestone pin
and very special to me.
I know my G.G. would love that her pin and love of knitting
live on through me.
Posted by Unknown at 5:16 PM 3 comments: 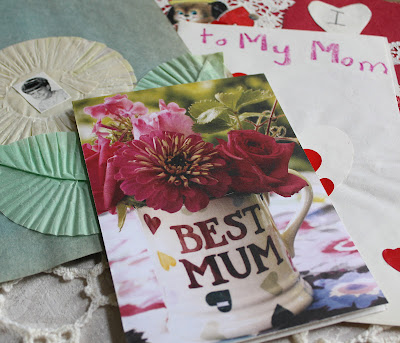 When you care to send the very best...
there's nothing like a hand-made card.

I've been making my mom
hand-made cards for years.

This year her Mother's Day card
is made with upcycled
Emma Bridgewater catalog photos. 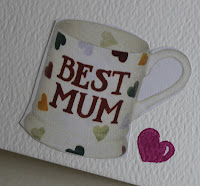 Posted by Unknown at 1:21 PM No comments: